At this year’s event in Leland on Saturday, he provided an update.

“Last year I talked about being homeless. Now I’m here to tell you today I am a homeowner in Southport,” he said.

Jones said he is working three jobs to reach a combined 40 hours a week.

“If you want things in life you have to work for them,” he said. “Nobody owes you anything.”

Jones said he once had a “poor, pitiful me” attitude but has learned to be positive.

The coalition brought its sixth annual Hunger and Homeless Banquet to the Brunswick senior center in Leland on Nov. 18.

The gathering also included first-person accounts from people who have been homeless and received help from the homelessness prevention community.

Following an opening prayer from Fran Salone-Pelletier, Jones sang “Amazing Grace” as part of the invocation.

Joe Staton talked about the stigma that comes with being homeless, which makes it difficult for some people to seek or accept help.

“People can be judgmental. If they see a homeless person they think he did something wrong,” Staton said.

Staton said he had a place where he was living and was in a relationship with a woman with two children. When their relationship ended, he said, he felt he did the right thing by leaving so she had a place to live. But it left him without any housing options.

Brunswick Family Assistance helped him get into an apartment, Staton said.

“One day it was a struggle scraping by,” he said. “The next day I was able to make a plan for the future because I had a base.”

BFA executive director Stephanie Bowen said her agency helps assist people who are 130 percent below the poverty line. She gave an example of a family of four living on $25,000 a year.

In addition offering assistance with utilities, rent, medications and emergency shelter, Bowen said BFA offers a financial literacy program to teach budgeting and tracking expenses and a job skills training course to help people search for jobs and plan for applying and interviewing for them.

Bowen introduced Jaye Cuffee, who took the BFA financial literacy course when he learned his father owed $20,000 in taxes on the home Cuffee moved into with his wife and five children. He said he learned how to stay on top of bills, clip coupons and the importance of learning not to live paycheck to paycheck.

Brunswick County commissioner Pat Sykes attended the banquet to present a proclamation from the county board recognizing the week of Nov. 11-19 as National Hunger and Homeless Awareness Week.

Sykes said she grew up in a family of eight children with an alcoholic father and her family was homeless at times.

“Back then our church family provided for us. Back then I had many hand-me-downs, but I’ve come a long way because of people like you,” Sykes said, thanking the volunteers and organizers.

Cecelia Peers, administrator for the Homeless Continuum of Care, which covers Brunswick, Pender and New Hanover counties, spoke about its efforts to get an accurate picture of homelessness in the tri-county area and help the homeless find transitional and permanent housing. It tracks homelessness through the school systems, an annual nationwide point in time count, a homeless assessment report and internal database.

Peers said homelessness people are those living in a place not meant for human habitation, emergency shelters, transitional housing or exiting a temporary residence.

In addition to existing shelters and resources, Peers said, specific programs like Preventative Diversion can provide funds to help people remain in housing they already have so they don’t become homeless. A Rapid Re-Housing program offers short-term financing to help put people in housing as quickly as possible and a Homeless Veteran Strategy Team can help provide veterans with affordable housing.

The keynote speaker, Terry Allebaugh of the North Carolina Coalition to End Homelessness, discussed programs like Rapid Re-Housing, his work with military and veterans’ affairs and the change in methods for providing assistance.

Where once the objective was to get homeless people housing-ready, the coalition now strives to find stable housing as soon as possible and then provide support to help them be successful, Allebaugh said. The federal objective for ending homelessness would return a homeless person to permanent housing within 30 days of beginning assistance.

While it sounds over-ambitious if the effort cuts the average amount of time a person is homeless from 67 days to 60 days, Allebaugh said, they are seeing an improvement to build on.

“We want to define homelessness as rare, brief and non-recurring,” he said.

Allebaugh also recommended groups involved in homelessness assistance get the word out by organizing a community summit and declaring their own mission to end homelessness. They could also prioritize the needs for the area, like an emergency shelter for Brunswick County.

Allebaugh encouraged the attendees to take the efforts public by making presentation to the county, city and town councils and ask former homeless people to share their stories.

Hope Harbor Home is for single women and women with children who are victims of domestic violence to assists in moving on to permanent housing.

Brunswick County Streetreach, which coordinates interfaith sheltering during winter and access to shelter during summer.

Brunswick County Homeless Coalition assists county residents who are homeless or at risk of homelessness with resources and crisis support.

A Housing Crisis Hotline (910-444-4998) is available from 9 a.m. to 3 p.m. Mondays through Fridays to screen people for diversion or shelter

The Brunswick Homeless Task Force committee meets at 9 a.m. the third Monday of the month in the second floor training room at the Brunswick County Administration Building. Meetings are open to anyone in Brunswick County who is interested in preventing and ending homelessness.

Brian Slattery is a staff writer for the Beacon. Reach him at 754-6890 or bslattery@brunswickbeacon.com.

WILMINGTON, NC (WECT) – About a hundred people gathered at the Brunswick Center in Leland for the Sixth Annual Hunger & Homeless Banquet Saturday.

Community leaders, experts, formerly homeless people, and concerned citizens were among the attendees.

The purpose of the event was to educate the community about homelessness, but also to raise funds for the Brunswick County Homeless Coalition, which put on the event.

According to data provided at the event, there were 322 sheltered and unsheltered homeless people in Brunswick County in a count January 2017.

The Brunswick County Homeless Coalition assists about 300 people struggling with homelessness every year, according to the Co-President of the coalition.

Volunteer Joe Staton faced homelessness four years ago, but eventually got back onto his feet. Now, Staton volunteers with the Brunswick County Homeless Coalition.

“When I moved to Brunswick County I was homeless. And through a process of getting help… I was able to get an apartment, somewhere to live,” said Staton. “So now I volunteer to try to give back something and help the ones who still need it.”

Organization raises awareness for the homeless

BRUNSWICK COUNTY, NC (WWAY) — Ending homelessness and hunger in one county is the mission for the Brunswick County Homeless Coalition.

This event was to educate and raise awareness about poverty-related problems.

The event was free and hosted at the Brunswick Center at Leland.

The banquet and soup luncheon invited formerly homeless individuals to talk about their past struggles and learn about solutions.

Joe Staton who now volunteers with the coalition used to be homeless and said the help he received from them was life changing.

The Brunswick County Homeless Coalition is made up of volunteers and wants to continue to educate the community about the hunger and homeless problems in the area.

ATMC TV’s November 2017 “Our Hometown” show features, during its latter segment, an interview with Paul Witmer and Joe Staton of the Brunswick County Homeless Coalition. The subject matter covers the definition of homelessness, aspects of our homelessness problem with respect to Veterans and others, and the Coalition’s annual event on November 18th, 2017, spotlighting awareness of and solutions to poverty- and homelessness-related problems here in Brunswick County.

Our Hometown, hosted by Jim MacCallum, features in-depth stories about local people, places and events in Brunswick and Columbus Counties. Our Hometown airs every day at 8:30am and 7:00pm on ATMC TV.

The Homeless Coalition appreciates very much this opportunity to raise awareness, and we give a heartfelt thanks to Jim and to ATMC TV.

How many persons are homeless in Brunswick County?

How do you define homelessness?

How can we help homeless veterans find housing?

Is there a single path to end homelessness?

What is rapid rehousing and how does it work?

Are there really more than 400 homeless students in the Brunswick County School system?

The answers to some of these questions may alarm you. National Hunger & Homelessness Awareness Week is held each year during the week prior to Thanksgiving.

The Brunswick County Homeless Coalition takes this opportunity to enhance our efforts to raise awareness about the issue and what is being done locally to work toward meeting the needs, advocating for and working toward ending homelessness.

The best thing we can do is get more people involved.

Please go to the Brunswick County Homeless Coalition website at brunswickhomeless.com to learn how you can get involved. While you are visiting our site, please consider registering for our annual event on Saturday, November 18.

As we move toward the Thanksgiving season, and start to count our own blessings, please consider sharing some of that compassion with our neighbors who aren’t as fortunate as us. Together, we can make a difference.

Note: This is an archived article about a past event. There may be more current information about a related recent event at the following link: http://brunswickhomeless.com/banquet

At their October 19th, 2017 Town Council meeting, the Town of Leland showed their support of the Brunswick County Homeless Coalition by inviting us to receive an official proclamation of Hunger and Homelessness awareness week, November 11th – 19th, 2017.

Support from area governments and leaders is essential in the fight against poverty-related issues like hunger and homelessness, and the BCHC would like to richly thank the Town of Leland for all their recognition and support.  Leland is host this year to 2017’s sixth annual Hunger and Homeless Banquet and Soup Luncheon, scheduled for November 18th at 9:30am.

Brunswick County Homeless Coalition was on hand for Seniors Helping Seniors on October 13th, 2017 at BSRI’s Stone Chimney Road center. BSRI hosts the Seniors Helping Seniors event during the autumn season of each year as an opportunity to showcase area businesses and organizations of interest to seniors. Lots of area businesses, groups, and organizations were present for the information, the fellowship, the entertainment and the food. At the BCHC table, about 75 people stopped specifically to talk with us and learn more about problems and solutions here in Brunswick County. 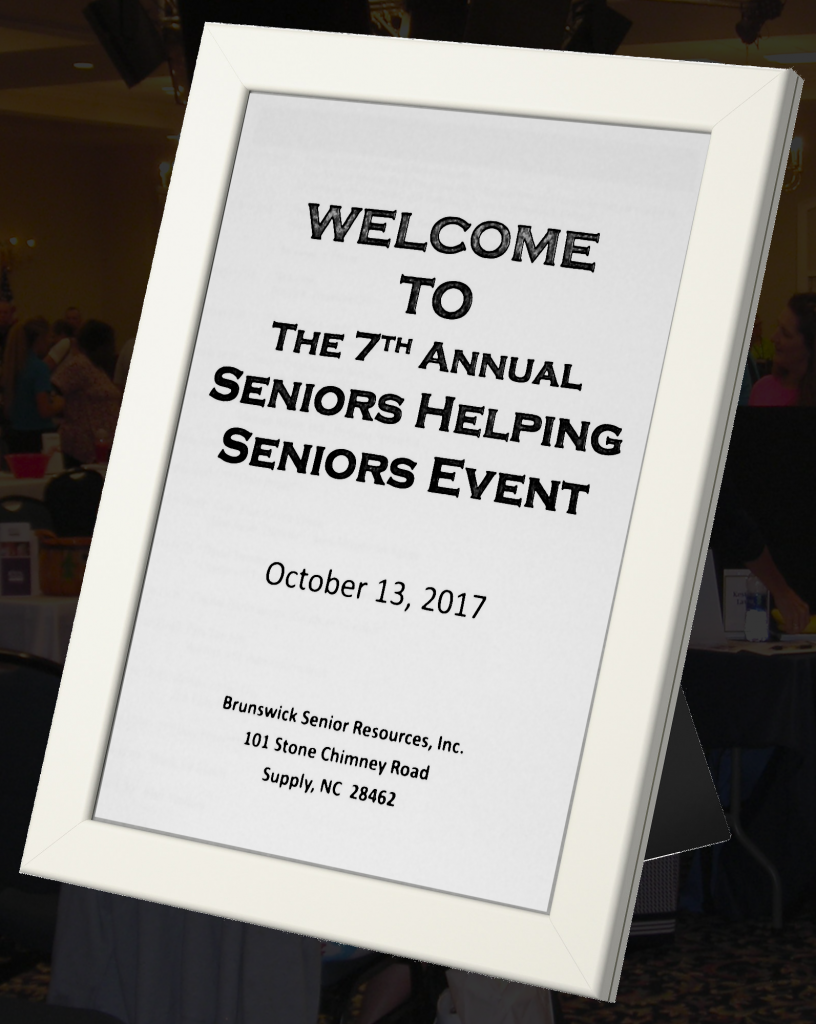 In 2016, the Brunswick County Homeless Coalition responded to 344 requests for assistance. 48 families (104 people) were provided 140 nights of emergency shelter, and 296 families received assistance with rent, utilities, food, medications, and/or transportation.

Your donations are very important to us and to those we serve. Please consider donating any amount to help.

Brunswick County Homeless Coalition was pleased to participate in Resource Days, September 20, 2017 in Southport, NC, and September 30, 2017 in Leland, NC. 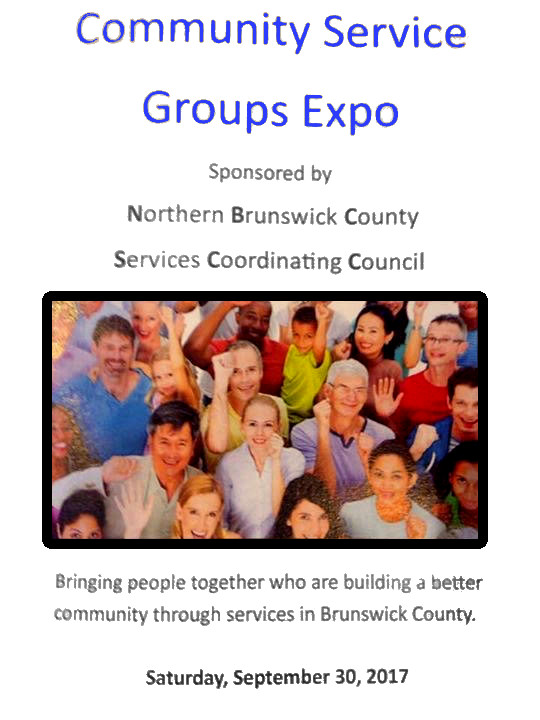